The Question of Individual Liberties as Critical to Improving the Human Condition
April 2-3, 2014

The 2014 McMaster Symposium committee invited individual papers, round table discussions, and panels that address the relationship between "individual liberties" and the various needs, values, expectations, beliefs, traditions, and orientations that may constitute an "improved human condition." Over the course of the symposium we seek to examine the "individual liberties" concept from the perspective of a wide range of disciplines, including but not limited to the fine arts, economics, political science, social sciences, education, peace and justice studies, communication arts, and the sciences.

Larry E. Schweikart, a former rock drummer who opened for "Steppenwolf," is an American historian and the author of more than a dozen books. He will be speaking on Wednesday evening, April 2, 2014.

Throughout high school and college, Dr. Schweikart spent most of his time playing drums in a variety of rock bands. In 1972 upon graduation he joined a band called "Goldmyne" led by John Tatum, formerly of the "Earwigs," which was the forerunner to "Alice Cooper." When that group broke up, he played in several other groups before joining "Rampage," a southern-rock group that opened for "Steppenwolf," "Savoy Brown," and "Mother's Finest." The band cut several records, one of which had limited release and was reviewed by Billboard and Record World.

Leaving the band in the mid-1970s, he returned to Arizona where he re-entered ASU to obtain a teaching certificate, taking a history course that inspired him to become a history professor. Upon receiving the MA, he was admitted to the University of California, Santa Barbara, and had already published his first book, A History of Banking in Arizona. During his study at UCSB, he published his second book, a study of the Trident submarine program with his former professor at ASU, D. Douglas Dalgleish. In 1985 Larry received an appointment to the University of Dayton. His doctoral dissertation, published as Banking in the American South was awarded one of the top three economic history dissertations in the United States.

Since arriving at UD, Dr. Schweikart taught business and economic history, then military history. In the 1990s he began to focus on "trade" books as opposed to academic or textbooks, beginning with his history of American business, The Entrepreneurial Adventure, then in 2004, after almost a decade of research and writing, co-authored the best-selling U.S. history book, A Patriot's History of the United States. He continued to publish major trade books on national defense, history and historiography, and the U.S. economy. 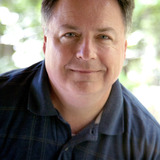 Dr. Andrew Ade is a playwright and associate professor of English at Westminster College and will be presenting on Thursday, April 3, 2014. The time and location of his presentation is to be determined. He is the author of many plays which dramatize social conflict. Among his many awards, Ade has been granted the Kennedy Center National Teaching Artist grant, and the National Endowment for the Humanities Summer Seminar grant. Ade earned a doctorate in Comparative Literature from The University of North Carolina at Chapel Hill in 2006.

Ade's most recent publications focus on conflict in Africa, which he experienced firsthand during his service in the Peace Corps. Ade served in Zaire (now the Democratic Republic of Congo) from 1981-1983 where he taught English. His one act play, A Question of Taste, won the first place prize for drama in the annual competition conducted by the Arts & Letters Journal of Contemporary Culture. The play has been produced by the theater department of Georgia College and State University and was published in Arts and Letters in March of 2010. The play was also awarded the Best Play Award at the Theater Festival in Black and White in 2007.